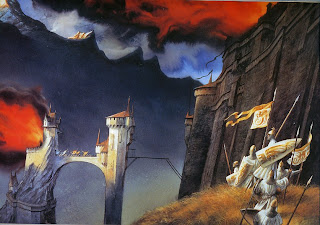 I was playing a high level mage in Angband. Then my computer operating system got corrupt. Had to reload my machine from scratch. I lost my game character. Note to self: backup my save files.

When it came to install Angband on my machine again, I decided to try an old version. This was just for memories sake. In fact I tried to start out with Moria. However that did not seem to run on Windows XP.

Instead I chose something like Angband Version 2.5. You might think that is not too ancient as we are only around version 3.1 currently. However it really has been a long time. My version might be 15 or more years old. The thing that impress me is that, although some things are different, even the old Angband is a very mature game.

For now I am playing a Half-Troll Warrior. That's an easy one to not get killed with. Lots of strength and constitution. Thus I have high HP. We shall see how this goes.
No comments: