Xero to the Rescue

I have had a number of characters that have died in Angband recently. It was very depressing. I tried a number of different races. None of them seemed to help. So now I have returned to my staple. I am running a human mage.

There have been two early developments that make me thing this character may be around for a while. The first was that I found the magic book "Tenser's Transformations". I hurried up to get to character level 32. Now I can cast the Elemental Brand spell.

This is a money making operation. I guy arrows from the shops. After branding them, I sell them back to the sops. With the proceeds from my elemental branding business, I have purchased all kinds of gain stats potions. My intelligence is maxed out. That comes in real handy for a mage.

The second reason I think this character might make it for a while is that I just found the boots of speed +8. That is enough said about that.
No comments: 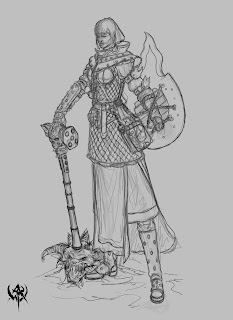 Once the character played by the Borg was dead, I decided to grow a new character from scratch manually. Normally I choose a human mage. Human is chosen to ensure I can advance quickly. And mage is chosen so I can get the identify spell at character level 11. However this time I wanted to try something different. I still chose to be a human. But I opted to be a priest instead. Thus Holyman was born.

Raising an early priest requires a different tactic. The magic is only supplemental. Battles must be fought like any warrior with hand to hand combat. Luckily you start out with a mace if you chose the priest class. So far I have been using this mace to apply the beat down to opponents. I save up enough gold to enchant the weapon to +10 to hit and damage. A ring of damage +11 helps as well. I find myself using the Bless prayer to gain a +10 to hit when in battle.

There were two discoveries that propelled Holyman into the big leagues. I bought an Amulet of Wisdom +4. Then I found some holy avenger weapon that was also +4 to Wisdom. So now I have a massive 18/80 Wisdom. There is a lot of mana for prayers there. I also have been able to learn all the spells in my spell book that my character level allows. If I could find some more spell books, I have more prayers that I can learn.

I have only found one artifact so far. They are some gloves that speed my regeneration. That comes in handy since my amulet slot is dedicated to the Amulet of Wisdom. I cannot afford to wield an Amulet of Regeneration right now. May the force be with you Holyman. My next goal is to find that spell book that contains the identify spell for priests.
No comments: 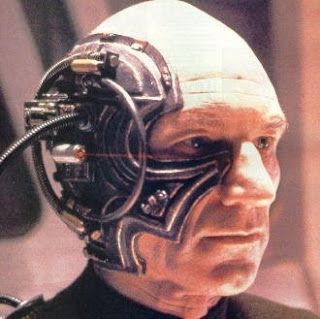 The Borg quickly brought my character up through the character levels. Every once in a while I would stop the Borg and check on the progress. I was most interested in any artifacts the Borg had discovered. At first there were few. Then the Borg started diving down, getting nice treasures.

By the time the Borg reached character level 50, it had great items to spare. Normally I go for the items that give me the highest speed. The Borg chose otherwise. For example, it kept a Ring of Speed +14 at home. I would be wielding that on my finger immediately. The Borg also found at left Ringil at home. Come on. It gives you +10 speed!

In the end, I just let Borg do most of the playing. It dived down to dungeons levels 81 through 99. It strangely spent a lot of time at levels 80 and 81, even when it had gone much deeper previously. Eventually the Borg character died too. I did not feel that bad. The computer did all the work. Now it is time for me to start up another character. Maybe I will not choose human mage this time.
No comments: 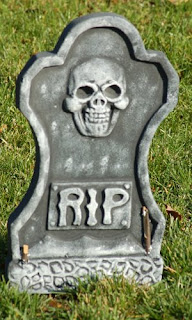 My character Bizz started to get really powerful. So I decided to have him dive quickly into the dungeon. He was character level 32. So I thought he could go much deeper than dungeon level 26 where I was staying at.

At first things just got a little more difficult. I found that I could defeat singular enemies. But when multiple enemies colluded, my health points got low real quick. I figured that all I needed to do was to exercise caution.

Then the unthinkable happened. Some type of bat from off the screen (or in an unlighted area) started breathing on me. It poisoned me. And it also took a whopping amount of hit points each time the bat breather. Before long I was dead.

Ouch. I had spent a lot of time bringing Bizz up. He had achieved some really nice items like two rings of intelligence +5 each. My overall intelligence gave me a whopping 250 mana points. I am not sure how I am going to recover. Perhaps I shall let the Borg have a shot to start up another character. More on that later.
No comments: 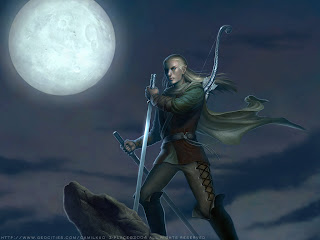 Recently I found the Short Bow of Amrod. I was excited when I read an *identify* scroll to figure out how this weapon would help me. It speeds my regeneration. That will allow me to free up my amulet slot (current I wear an amulet of regeneration). More importantly, the bow gives me a +2 bonus to both my strength and constitution. Both of these stats are low for me because I am a mage. This weapon should have little detriment as I already have an empty slot for a bow.

To tell the truth, I really don't know much about Amrod himself. All I do know is that he was a son of Feanor. His father Feanor is a much more famous character. Feanor made the Simarils. He also gave Melkor the name of Morgoth. And that is is who we are trying to defeat in the game of Angband. Who knows? Perhaps this bow from Amrod will help me to eventually achieve this goal.
No comments: 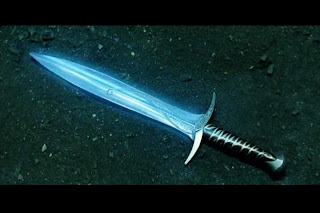 I had been diving down into the dungeon lately. But I had not found anything really worthwhile. In other words, there were no artifacts to be found. Then I found a room full of trolls. That took some time to wipe out. My reward? The Broad Sword Orcist.

Now I thought that I might finally wield an artifact. However I did not find this sword compelling enough. My current weapon is a Broad Axe of Westernesse. It gives me extra strength, dexterity, and constitution. All those qualities are lacking in a mage.

I tried to sell Orcist at one of the weapon shops. But the owners were not offering enough gold. I guess they have their limits. For now I shall wait until new owners occupy these shops. Then maybe I shall pawn it off to a dealer. I am impressed by the history of this sword. It was wielded by none other than Gandalf the Grey.
No comments:

You See a Metal Cap 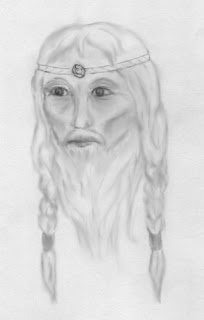 I wanted to dive deeper into the dungeon. However I got a message about this level being lucky. So I decided to thoroughly search the level. I found a lot of evil opponents there. They all fell to my magical offensive.

It was not until I cleared out the last room, which was infested with trolls, that I found a nice treasure. It was the metal cap of Thengel. Bam. I figured I would wield this thing. It would be the first artifact that I would wield.

I went back to town, and found that I did not own a scroll of *identify*. That did not matter. I just bought one for a cool 3k gold in the black market. So I read it, and identified this cap I found. It turns out it increases wisdom and charisma by 3. It also resists confusion. Finally it cannot be harmed by the elements.

In the end, I decided to sell Thengel. It got me a nice 20k gold from Maughlin the Grumpy. I am going to stick with my cap of seeing. That's because I hate to be blinded. None of my other armor protects against blindness.

I shall end talking a little about Thengel himself. He was one of the kings of Rohan. One of his main claims to fame is that he sired Theoden. It seems Rohan has produced some good headgear. I look forward to the day when I locate the helm of King Hammerhand. You will surely hear about it when I do.
No comments: 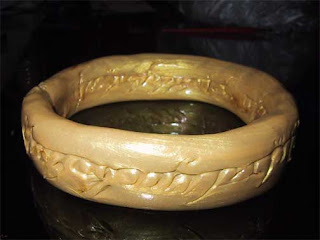 In Angband, you only have two rings fingers to equip. It is sometimes a tough choice given all the kinds of rings you can find/buy. Initially I gave my character Bizz a ring of see invisible. I hate invisible creatures sneaking up on me and stealing my stuff. This ring gave me a better awareness.

My character is now a level 25 mage. I have two main techniques for battle. I haste myself. Then I cast offensive spells. All of this requires a lot of mana. Therefore I have decided to wield rings of intelligence on both of my ring fingers.

I am severely lucky to have purchased two rings of +5 intelligence each. Now I must confess that I participated in a little scumming to locate the rings. But that is a story for another post. Currently my intelligence is a whopping 18/130. That gives me a Max SP of 155. In other words, my magical ability is plain evil.
No comments: