Getting Ready For Chess 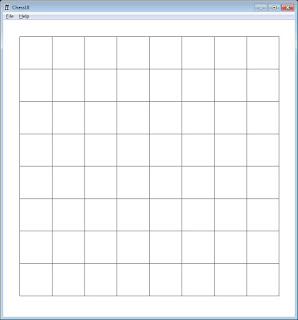 I decided that I wanted to try my hand at writing a chess game. Started thinking about the objects. The pieces were a bit complicated. So I simplified my aim and decided to go for checkers instead. I wrote some classes. Got some logic in there. Represented a game board with pieces on them.

At first I just used text to output the game board. It looked terrible. Plus it was clunky to specify the move you wanted to make. I did this to spend as little time on the user interface, leaving more time for the actual checkers engine. Never got to it.

Later I took a Udemy class that helped a lot. It was Learn to program Tic Tac Toe Game in Visual C++ on Windows. Whew. Lengthy course name. This was an awesome course. It got into the details of drawing the game board and playing the game. Just what I needed. Best of all, the course is free. Props to course instructor Mohammad!

With this knowledge, I launched my Visual Studio. Decided on a Win32 project. Much of the boilerplate was provided by the template for this project. I first customized the About box because it was easy. Then I filled in the WM_PAINT handler. It was actually quite easy. Now I have a game board drawn.

Next step: draw some checkers pieces.
No comments: