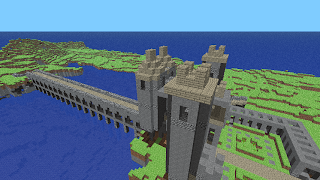 Recently Notch, the creator of the game Minecraft, participated in a 48 hour game creation contest. He spent the two days coding up a game from scratch. Notch has a lot of fans. About 10,000 of them watched as he streamed his computer screen while developing a game. Apparently this was an epic experience.

Notch banged out Java code. He did not need to Google any specific topics. Damn. The guy must know his APIs. The result was a 3D game that wss running a few hours before the 48 hour deadline. We need this guy participating in some roguelike 7DRLs. He might create something revolutionary.

This guy does have a day job. He works on his Mincraft game, as well as some other new games coming out from his company. You got to give this developer credit. He know how to knock out code.
No comments: