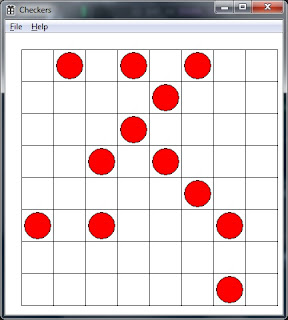 I am back to working on my checkers program. Added the capability for the player to jump over and capture the computer pieces. The computer cannot jump over the player pieces yet. And there is no double jump. But all of those are coming soon.


Eventually I will need the ability to promote pieces to kings for both sides. However right now I am focusing on baby steps. It is working out pretty good. Just doing some game logic. Not learning a whole lot of C++. But hey. Any programming is good practice.

Moving to the Checkers App 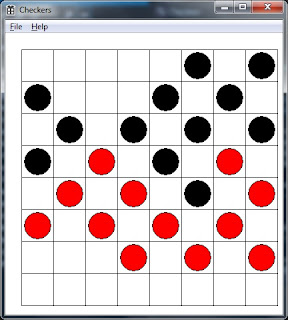 Originally I started writing a chess app to practice some C++ programming. The movement of the pieces were tricky. So I decided to work on the simpler checkers game. Having drawn the board, I am now drawing game pieces on the board.


I can respond to the player choosing a piece. The selected piece gets highlighted on the screen. Also can have the player click on the location where the piece should be moved to. Implementing simple checkers movement rules (no jumping opponent pieces yet).


Now that the player can move, time for the computer to do the same. Originally I thought I would generate a list of all possible moves and rank them. But for now I just have the computer choose the first available move.


These limitations lead to a pretty boring checkers game. I guess it is time to implement jumping/capturing opponent pieces. After that, I must implement piece promotion to kings. One thing at a time though.