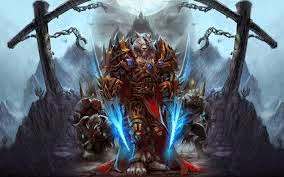 I recently started watching the Sword Art Online anime. It is about player who enter an MMO and get stuck in there online. It is really good. I am still on season one. This got me thinking that I want to get into an MMO. At least I should try one out. Why not World of Warcraft?

Yes I am a bit late to the game. Ten to twelve years late for WoW. But better late than never. Okay. I found I needed to create a Battle net account. Done. I figure I would try the free version of WoW to start. Aha. They have a downloadable version. But it is 30Gb large? Wut?

I let the download go over night. Somehow it stalled. So now I am still trying to download this massive thing. I guess there must be a ton of graphics, sounds, and cut scenes in this download. After waiting so long to get the program, it had damn well better be good.

There are some advantages coming late to the scene. Maybe I could buy a high level character on of my friends is getting rid of. I could also join up with a guild that some friends may be in. Or I could just start like a newbie. That might be more fun. Let's see how this goes.