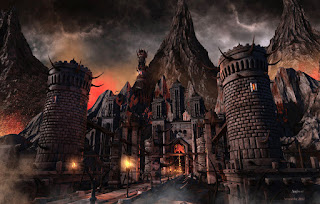 I recently died playing Angband. Had been playing the character for a long time. Got complacent. That resulted in a death. So it was time to roll the dice again. This time around, I chose a human warrior. Got lucky with a unique weapon early on in the game.

This new character found some boots of speed too. I made sure I had something to prevent blindness. And I wore two items of resistance. Then I headed down deep. I cleared out a level. Had a lot of stuff I needed to sell up in town. Tried to read my scroll of recall. Ooops. I have no scrolls.

I knew I was running low on the scrolls. Happened twice in a row that I could not buy any in town. I guess the little I had must have burned up when I was not paying too close of attention. Now I needed to walk all the way up into town.

Conserved my food. Scummed the stairs. If I saw a way up, I would climb up. Otherwise just went up and down the stairs to see what random things would get generated. Any items that would help me detect the stairs were picked up. Two thirds of the way up, I found a scroll of word of recall. I decided not to use it. I came this far. Might as well walk all the way up.
No comments: